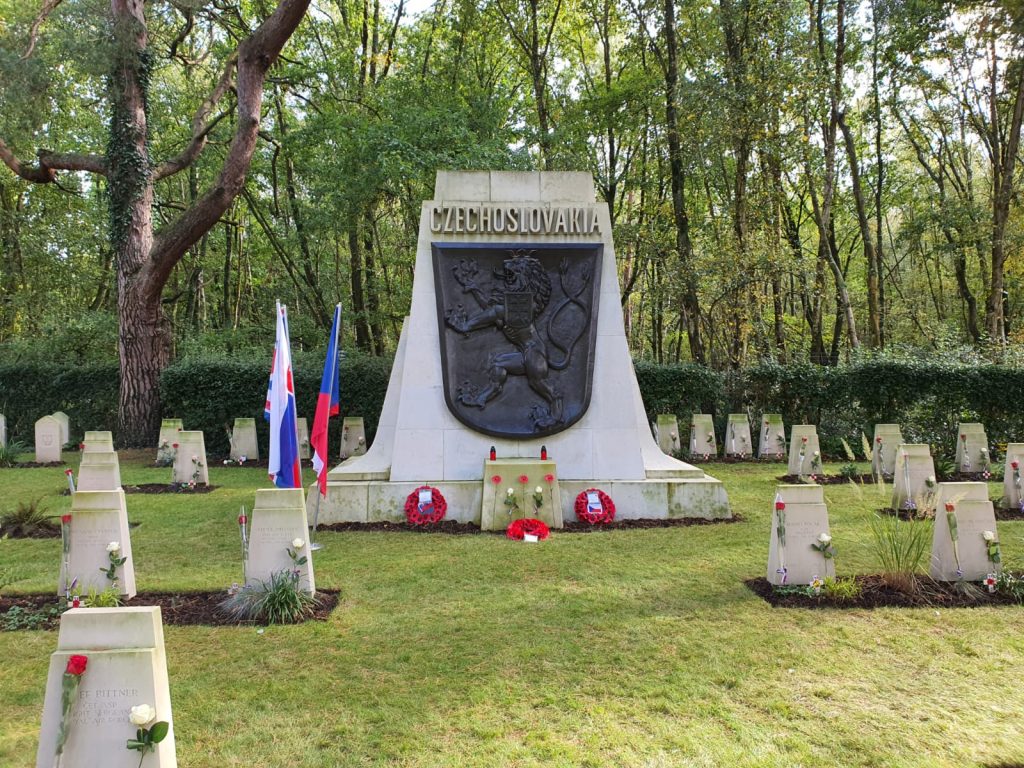 The  Czechoslovak Memorial stands in what is known as plot 28. It came about because of a Wellington crash in 1942 and the urgent need to find space for a mass grave where all the airmen could be interred.  After the burial, the entire the plot was purchased by the Imperial War Graves Commission for £75 from the London Necropolis Company.  It was agreed by Air Vice Marshal Janousek KBE that it would thereafter be used as military cemetery for air force personnel who became casualties around London and provided a capacity for 50 graves.  The IWGC, (later renamed Commonwealth War Graves Commission), acquired rights in perpetuity over plot 28 and other sections that led to the military cemetery being enlarged into the extensive site it now occupies.

After the war the Czechoslovak Government decided the fallen, both soldiers and airmen, should rest where they had been buried originally.  A symbolic repatriation was carried out, with soil from each grave across the UK being sent to Prague for commemoration.  As a long term solution, that suited the British and Czechoslovaks, a reciprocal agreement was reached. The Czechoslovak authorities would centralise all British casualties in Czechoslovakia at Olšany, near Prague, in a layout built to the standard British specification. In return, the British agreed to permanently mark the graves of all Czechoslovaks who fought with the British and were buried in the UK and abroad and also to maintain them

The advent of the Communist regime from 1948 seriously affected the progress of implementing that agreement.  It was in 1952 that state supported proposals for Brookwood eventually emerged. Despite the delays, a major policy shift occurred. Instead of leaving Brookwood as a local RAF plot, it was designated as the site of a national memorial.  The monument and headstone layout was completed, after further delays, by the end of 1955.  Though the design was entirely created by Czechoslovak architects, the construction phase came under the supervision of Ralph Hobday, a Principal Architect of the IWGC.  Also the materials admirably show the British connection, the monument and headstones being made from Portland Stone. The bronze lion emblem was cast in England from a life size mould transported from Czechoslovakia.

‘In memory of the soldiers of the Czechoslovak Armed Forces killed in the Second World War and buried in the cemeteries of the United Kingdom.’

That sentiment is echoed with the headstones of all Czechoslovaks buried outside Brookwood having a copy of lion emblem inscribed to honour the sacrifice they made for their country.

Originally the plot just held the remains of 45 Czechoslovak Airmen, all of whom were part of the RAF during WWII. Because the lion on the memorial was so prominent, it was agreed to be unnecessary to incorporate this symbol on the new headstones that replaced the original wooden crosses. These headstone designs are therefore unique only to Brookwood.

In 2020 a new headstone was added that changed the plot forever. Dr George Scott together and the Chair Mrs Gerry Manolas, worked with the CWGC to have a stone erected for Captain Karel Šeda. He had been in the Czechoslovak Independent Armoured Brigade based in the UK and had died whilst taking part in parachute training in Ringway, Manchester in 1942. Unfortunately his ashes had laid unclaimed in the chapel of rest until 1962 when they were discovered. It was agreed that Captain Seda ashes should be buried at Brookwood as it was now the national monument to all Czechoslovak casualties on August 11th 1964. Unfortunately, no family could be located at the time and only 1 official came from the Embassy.  For some unknown reason he never received a headstone until this year. He is the only Army representative at Brookwood and his headstone is the only one with a Czechoslovak Lion on. This is because the rules regarding the design of the stone have changed since the end of WWII.

In 2021 together with the Czech Embassy and the CWGC the MAFCSV worked to have WAAF Edith Sedlakova remembered on the same headstone as her husband Zdenek. Although both had been serving military personnel when their plane crashed on 5 October1945 Edith had been buried in the communal grave for the women and children who had been onboard the flight in the civilian cemetery next door. This joint headstone was proudly unveiled by the Czech and Slovak Ambassadors in May and the ceremony was attended by the descendants of Edith and Zdenek and of the MAFCSV committee.